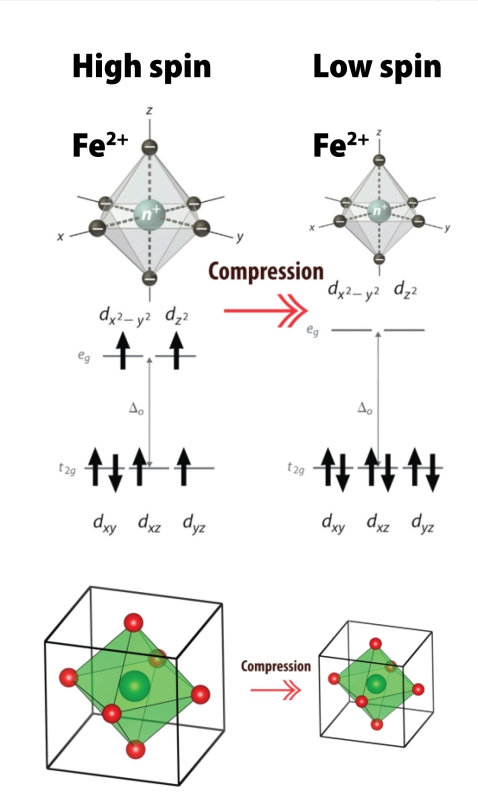 The solid solution of MgO and FeO-(Mg,Fe)O or ferropericlase is an important example of a simple solid state system incorporating a transition element. Despite an apparent simplicity, the system exhibits strong correlations between electronic and structural degrees of freedom under compression. These correlations lead to different experimentally observed or theoretically predicted anomalies of compressibility, electrical conductivity, diffusion and other physical properties. On top of that, the compression driven iron spin state crossover is considered as a physical phenomenon of a quantum critical point type. Additionally, (Mg,Fe)O is considered as the second most abundant constituent of the Earth’s lower mantle, and investigations of the ferropericlase behaviour under compression contribute to our understanding of the processes deep inside the Earth.

Within the project we described sensitivity of the system to nonhydrostatic stresses and strains. Then, based on the results obtained from quasi-hydrostatic single crystal X-ray diffraction experiments, a new model describing a relation between the onset of the crossover and structural parameters, valid for the broad practical range of compositions relevant for geoscience, has been established. The importance of Fe-Fe next-neighbor correlations in a solid solution and their influence on the observed physical phenomena, including the iron partial phonon density of states as a function of composition, was described.